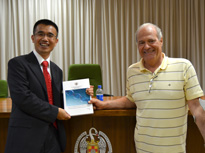 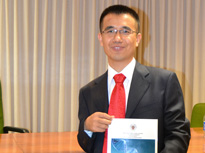 Management of Agricultural and Environmental Risks

The Secretariat of Agriculture, Food and Environment (MAGRAMA) organized this seminar on 25th June in Madrid.

Professor Sanchez-Vizcaino participated with the oral communication "New surveillance based on risk: European projects that will change the history of the prevention and control of diseases".

Diptych of the seminar (spanish) 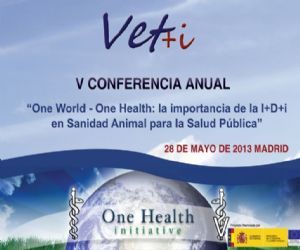 The Conference is titled "One World-One Health: the importance of R & D Animal Health for Public Health", will take place on May 28 in Madrid.

Professor José Manuel Sánchez-Vizcaíno give a lecture on "Present and future of emerging zoonoses".

Master in swine health and production

The management team of the Master is pleased to invite you to the Official Opening and Closing 2013 Edition 2012 Edition of the Master in Swine Health and Production next June 4.

aris, 26 April 2013 - Tomorrow in many countries around the world, World Veterinary Day (WVD) will be celebrated for its thirteenth year.  On this occasion the veterinary profession highlights its various contributions to the health of both animals and humans, underlining the vital role of veterinarians in also ensuring animal welfare, food safety, food security, safe world trade in animals and animal products as well as protecting public health.

WVD was initiated by the World Veterinary Association (WVA) in 2000 in order to celebrate the veterinary profession annually on the last Saturday of April. The objective is to bring the importance of the Veterinary Profession to the society as well as individuals in focus.

World Veterinary Day activities around the world vary from seminars, workshops, "open doors " activities at clinics, hospitals and veterinary schools, social and media events to inform the general public about the key role played by veterinarians in our daily life.

In previous years themes were Antimicrobial Resistance, Rabies, the One Health Concept and the Diversity of the veterinary profession.

The veterinary profession, through effective and efficient Veterinary Services, is crucial to the success of vaccination campaigns in animal health and consequently, in protecting human health from diseases of animal origin.

A vaccine is a biological preparation that improves immunity to a particular disease. The term vaccine derives from Edward Jenner's 1796 use of cow pox, to inoculate humans, providing them protection against smallpox.

Today, vaccines are valuable tools to stop the spread of a large number of transmissible diseases that threaten the health and welfare of animals and people. Through well organised campaigns, vaccination contributes to the eradication of diseases from certain areas and even from the world. The use of mass vaccination campaigns also limits, in many situations, recourse to depopulation in case of disease outbreaks.

Order AAA/570/2013 laying down specific measures of protection in relation to bluetongue virus.

After ARM/3373/2010 Order, which established the cessation of compulsory vaccination against bluetongue from July 2011, the epidemiological evolution of the disease has been considered favorable except for a defined geographic areas in the northern region of Extremadura where has been detected the viral serotype 1. Therefore, the Ministry of Agriculture, Food and Environment has found necessary to re-establish mandatory vaccination against serotype 1 in areas with high risk. The aim of this measure is the final eradication of the disease.

Vaccination against serotype 1 BTV is required in animals of the ovine and bovine spp older than 3 months of age that are located in the following region and municipalities listed in the following table. It is made ​​with inactivated vaccine and prior to 31 July, 2013.

In addition, the competent authority may apply special mandatory vaccination programs in certain farms with high risk for transmission of bluetongue virus. Furthermore, in cases where it is not mandatory vaccination of animals, the holder may choose to vaccinate animals which are found in area restricted.

The recognition of excellence is essential to improve the progress of our profession, its evolution and its quality, especially in a profession like ours, vocational and sacrificed as few.

Albéitar Awards recognize those who represent the different aspects dignify the profession, its scope, its importance and significance in it.

New in the media: ideal.es

The Andalusian Council of Official Associations of Veterinarians (CACV) has awarded this year's 2012 Albeitar prize in the scientific category to José Manuel Sánchez-Vizcaíno. This is the second edition of these awards, whose purpose is to recognize the work carried out by people and institutions in favor of the development and improvement of the exercise of the veterinary profession and are granted to the Scientific, Disclosure and Institutional categories.

The award ceremony will take place on March 6 at the headquarters of the Rector of Granada.