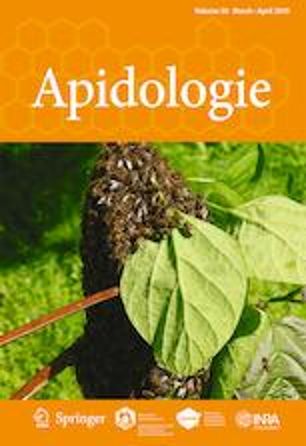 Western honey bees (Apis mellifera) are key players in crop pollination and in the maintenance of global biodiversity. Their viability is threatened by Varroa destructor, which acts as a vector of the deformed wing virus (DWV). Several genetic DWV variants have been reported, but it is unclear whether their virulence differs. We examined the prevalence of V. destructor and DWV as well as bee health in two colonies over 21 months and then characterizing DWV variants from each colony using phylogenetics. Colony H showed no signs of disease or mortality, and DWV sequence from this colony clustered with VDV/DWV-B sequences previously reported in healthy colonies. Colony W showed DWV symptoms, and DWV sequence clustered with DWV-A sequences previously reported in colonies with symptoms. These results suggest that nucleotide variations in the DWV genome can affect its virulence. Genotyping DWV variants in colonies may be an effective tool to assess risk and initiate preventive measures early.