African Swine Fever (ASF) is currently the biggest challenge for the pig sector globally and the biggest current problem in animal health. It is an infectious disease caused by the ASF virus that affects swine, both domestic and wild boar. Due to its important economic and animal health implications, it is on the list of notifiable diseases of the World Organization for Animal Health (OIE).

Its current situation is of great concern worldwide due to its extensive expansion in recent years, currently affecting four continents where more than 78% of the global swine population lives. ASF has not only maintained in many African countries, it has also advanced in countries on the European continent and has affected the Asian continent and islands close to Australia for the first time. In Asia, it has made its way through the largest pig producer, China, which is home to nearly half of the global pig population. During 2019, the number of domestic pigs slaughtered due to ASF was ten times greater than in 2007 and five times greater than in 2018 (Table 1). 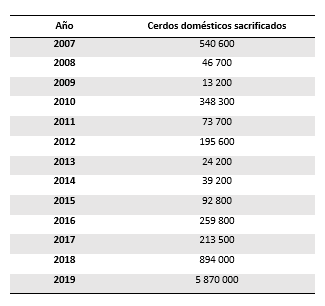 The lack of vaccines and treatments available to fight against ASFV infection is one of the reasons for its great geographical expansion without control. In this sense, the control of ASF is based on the implementation of strict sanitary measures. However, sometimes, implementing the biosecurity measures necessary to stop the spread implies changes in traditional practices and ancestral customs, which represents a real challenge for health workers.

In this section you can find all the information on the epidemiology of ASF, its history, its current situation and the new research challenges, as well as regular updates by sending new communications.

ASF was first described in Kenya in 1921 by Montgomery. It was described as a high lethality disease (99%) in recently imported European pigs. In the following decades, its presence was observed in several countries in sub-Saharan Africa.

First occurrence of ASF outside African continent occurred in Portugal in 1957, on a domestic pig farm near Lisbon. However, this outbreak was quickly controlled after the slaughter of more than 10 000 domestic pigs. After an epidemiological silence of three years, in 1960 the disease reappeared in Portugal, rapidly spreading to the whole Iberian Peninsula. Since then, ASF remained present in the Iberian Peninsula for approximately 35 years, until its eradication was achieved in 1994 in Portugal and 1995 in Spain, consequent to great human and economic efforts.

During these years of ASF in the Iberian Peninsula, several European and American countries suffered outbreaks of ASF (Figure 1), mainly caused by movement of contaminated meat products. However, these outbreaks were eradicated except in the island of Sardinia, where the disease remains endemic since 1978.

Currently, the island of Sardinia has been more than a year without positive notifications in domestic pigs or wild boar, the application to declare themselves an ASF-free country is ongoing. 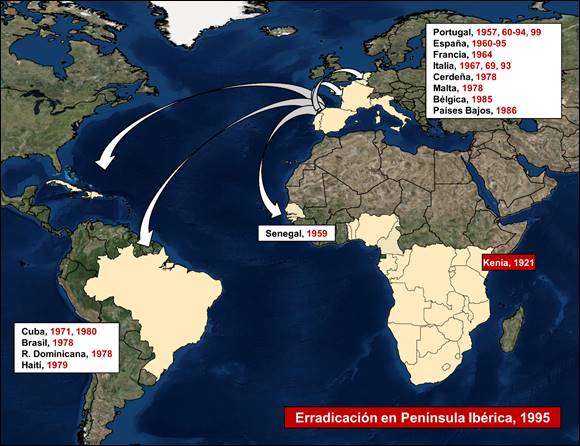 Since the eradication of ASF in Spain in 1995, with the exception of Sardinia and an isolated outbreak in 1999 in Portugal, the disease remained confined to the African continent. In the last decade, ASF became very important in Africa, affecting a large number of countries previously free of disease, spreading to West and Central Africa, with a consequent increase in circulating virus and hence contaminated meat products.

This fact may have contributed to the most important epidemiologic change of ASF in recent years. In 2007, there was a great jump of the disease, with the reentry of ASF virus on the European continent, this time, by the Caucasus region. First outbreaks of ASF occurred in Georgia, near the port of Poti. Since then, ASFV has been spreading uncontrollably into new territories. 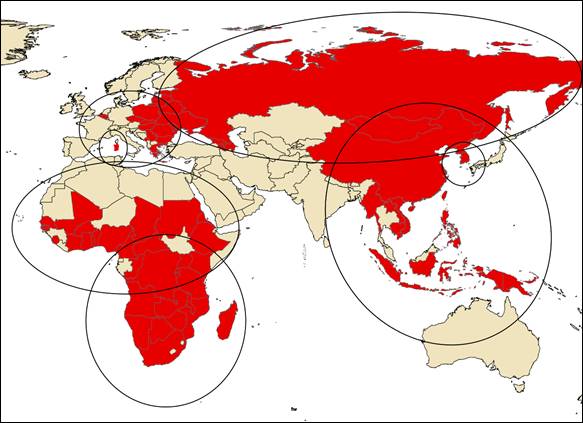 In Africa, the swine population has doubled over the past three decades, leading to an increase in the number of notifications and regions affected by ASF. Currently, a large part of sub-Saharan countries are endemically affected by this disease. The 24 different genotypes of the ASF virus described to date have been observed in this territory, with the greatest variability being found in the eastern part of the continent.

In South East Africa is found a very complex epidemiological cycle characterized by the coexistence of wild swine, such as the bushpig (Potamochoerus larvatus), the warthog (Phacochoerus africanus) and the giant forest hog (Hylochoerus meinertzhageni), soft ticks of the O. moubata complex, and domestic pigs. Wild swine in South East Africa have the particularity of being tolerant to the development of the disease, acting as reservoirs and a permanent source of the virus. In addition, the ASF virus is able to replicate in the ticks of the O. moubata complex, which can act as vectors in the transmission of the virus between wild swine and domestic pigs. The participation of wild hosts, both swine and ticks, makes their eradication extremely difficult.

The situation is different in West Africa, where wild hosts are not present, being the domestic pig the only host involved. In such a way the control and eradication in West Africa may seem easier, however, it also represents a major health challenge. This is because the pig sector is affected by socio-economic factors that limit the producers' ability to implement the necessary control measures for better management of the disease.

In Europe, since its re-introduction in 2007 through Georgia, the ASF has been advancing uncontrollably. In the first place, the disease began its expansion to the north, affecting in the same year Armenia, Azerbaijan and the Russian Federation. Since the Russian Federation, the ASF has affected countries such as Ukraine (2012) and Belarus (2013).

Subsequently, in 2014, the disease entered the European Union (EU) through Lithuania, Poland, Latvia and Estonia. In 2016, nine other European countries have been affected such as Moldova (2016), Romania (2017), Czech Republic (2017), Bulgaria (2018), Hungary (2018), Belgium (2018), Slovakia (2019) , Serbia (2019) and recently Greece (2020) (Figure 3). This situation represents a great risk for neighboring countries such as France, Germany and Spain, the latter two are the largest pig producers in the European Union, so the notification of ASF in these countries could imply considerable economic losses. 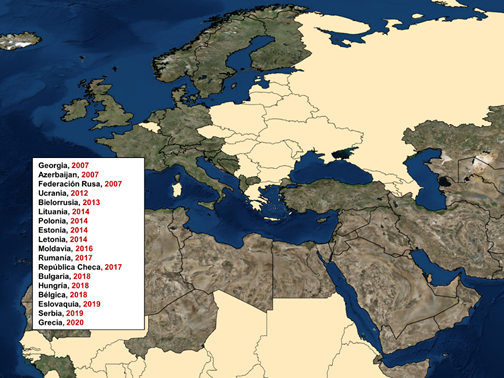 In Europe both domestic pigs and wild boar have been affected, the latter has shown to play a very important role in the persistence and circulation of the virus in the continent. In contrast to wild swine in Africa, Eurasian wild boar is susceptible to the development of the disease, presenting a clinical picture very similar to that observed in domestic pigs. The high abundance of the wild boar population in Europe determines very important aspects of the transmissibility of infectious diseases.

Within Europe, two different epidemiological scenarios have been observed depending on the predominant type of host affected. On the one hand, there are the affected countries of the European Union (with the exception of Romania, Bulgaria, Slovakia and Greece), where more than 90% of the notified cases are attributed to wild boar, with sporadic outbreaks in domestic pig farms. However, in Eastern Europe, including countries such as Russia, Ukraine, Belarus, Moldova and Romania, ASF mostly affects domestic pig farms and to a lesser extent wild boar. This difference can be explained by the fact that these latter countries have a greater number of family or backyard farms. This type of production system has low levels of biosecurity and are usually located in areas where wild boar lives, which increases the risk of transmission of the virus to domestic pigs. In addition, it is possible that in this type of farms feeding pigs with food waste is practiced. This activity has historically been one of the main routes of transmission of the ASF virus and is currently banned in the European Union.

The island of Sardinia, where ASF has been endemic since 1978, in recent years has achieved a considerable decrease in the number of notifications of the disease, both in domestic pigs and in wild boar. In this way, the island of Sardinia is close to being declared an ASF-free area. This has been possible after enormous efforts of epidemiological studies, of the administration and farms, being the capture and removal of the free-ranging pigs one of the most effective measures.

ASF was detected for the first time in Asia in August 2018, through China, at a domestic pig farm located in Shenyang City. The likely sources of introduction, based on epidemiological surveys, were the importation of piglets from infected areas and swill feeding. Genetic studies of the virus isolated showed similarities with those circulating in Europe.

The spread of ASFV throughout China has been considerably rapid compared to other epidemiological scenarios. This rapid spread has also been reflected in the cross-border advance, affecting 11 other Asian countries in 2019 (Mongolia, Vietnam, Cambodia, Hong Kong, North Korea, Laos, Myanmar, the Philippines, South Korea, Timor-Leste and Indonesia) (Figure 4). Recently, in March 2020, Papua New Guinea has confirmed the presence of ASFV in its territory, increasing concern in Australia due to the few hundred kilometers that separate its coasts. 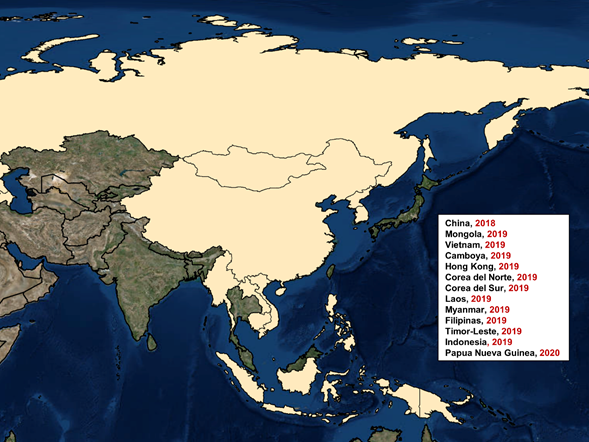 Some of the factors that are facilitating the spread of the virus in this continent are i) the lack of experience in the detection, management and control of ASF; ii) the characteristics of its pig sector, since there is a high number of backyard farms; and iii) the performance of traditional risk practices, such as swill feeding or even the use of blood or blood derivatives as a food supplement. With the exception of South Korea, where numerous cases have been reported in wild boar, most of the cases notified in Asian countries have been reported in domestic pigs.

Despite the control and prevention measures taken so far, ASFV has continued to advance to the continent, causing the death of at least 6 million animals. China is the world's largest pig producer, with more than 400 million pigs. Therefore, this situation is leading to serious economic and food supply problems, even affecting international trade due to the increase in price of pork.

In view of the current situation, it is necessary to reconsider and improve the strategies and programs for control and prevention against ASF. Among the great challenges of ASF control, highlights the lack of available vaccine, as well as the existence of different epidemiological scenarios.

For that reason, much of the research studies in ASF are focusing on the development of a safe and effective vaccine. The development of a vaccine against ASFV has been hindered throughout history by the great complexity of the virus, the lack of knowledge of the virus-host interactions, the absence of a neutralizing immune response and certain technical difficulties such as adaptation of the virus to a stable cell line. Currently, our SUAT-UCM group (www.sanidadanimal.info) is coordinating the VACDIVA project (www.vacdiva.eu) (nº 862874, H2020), endowed with 10 million euros, in order to expand knowledge in this area and to be able to get a safe and effective DIVA vaccine, both for domestic pigs and wild boar.

On the other hand, it is important to continue epidemiological studies aimed at identifying the risk factors in the affected regions and the potential routes of introduction in free countries. Because it is necessary to adapt the control and eradication programs to each of the epidemiological scenarios, incorporating their cultural and sociological characteristics, as well as reinforcing prevention measures in free scenarios. Training veterinarians and farmers on ASF is essential to prevent further spread of the disease.

In this way, an effective and safe vaccine together with the establishment of personalized control and eradication plans for each of the epidemiological scenarios could be the solution to stop the continuous spread of ASFV.

Protect your farm against ASF