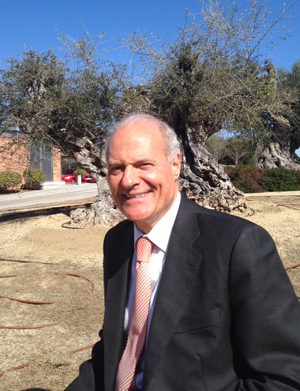 José Manuel Sánchez-Vizcaíno Rodríguez was born in Murcia in 1951. He received his Licentiate and PhD at the Veterinary Faculty of the Universidad Complutense. Subsequently, he conducted his post-graduate studies in animal immunology and virology at Cornell University in New York. Upon returning to Spain he joined the National Institute of Agricultural and Food Research (INIA, Instituto Nacional de Investigaciones Agrarias y Alimentarias) performing the following functions: Researcher (1978-1980), Chief of Research Projects (1980-1985), Chief of the Animal Virology Department (1985-1988), Chief of the Animal Health Department (1988-1993) and Chief of the Animal Health Research Center (CISA, Centro de Investigacion en Sanidad Animal) (1993-2002).

The Scientific contributions of Professor Sanchez-Vizcaino have notably contributed to the control and eradication of various animal diseases, among them the African Swine Fever, African Horse Sickness and Classical Swine Disease. All that thanks to the development of new methods and fast and sensitive diagnostic reagents, new epidemiologic strategies as well as the development of new vaccines.

He has more than 200 research publications in high international impact journals. He is the author of various chapters in books with international prestige (African Swine Fever and Diseases of Swine, African Horse Sickness in the OIE Terrestrial Manual, Trends in Emerging Viral Infections of Swine…) and digital courses dedicated to immunology and infectious diseases as well as sanitary simulations. He has directed a great number of research projects and 32 doctoral theses about infectious animals’ diseases. He has participated in 70 R&D contracts, in several patents and has contributed to more than 500 congresses, conferences, workshops and interviews (TV, radio, press, video, web) around the world.

He obtained the National Swine Research Prize ANAPORC in 1990, the International Swine Prize “PORCO BRAVO in 1999”, the First Prize on Swine Health and Production (Producción Animal 2000), the Animal Health Prize 2007 “Los mejores de La Verdad 2007” and the Prize Albéitar 2012 in the Scientific Category, in recognition of his contribution to the scientific development of the research in Veterinary Science.

He was awarded with the Merit Medal from the World Organization for Animal Health (OIE), as international recognition to his outstanding services to veterinary science (24/5/09), and has been awarded Doctor “Honoris Causa” by the University of Murcia (22/04/10); furthermore he has been nominated “2013 George C. Poppensiek Visiting Professor in Global Animal Health” by the Cornell University (09/2013).

Since 1990 Professor Sánchez-Vizcaíno has collaborated with the World Organization for Animal Health (OIE) and with the FAO in various health missions for controlling infectious diseases and for technological transference in several European countries, in America and Africa. He has participated in many national and international scientific commissions, such as

His current scientific interest is centered in the study of animal infectious diseases and particularly in the development of new diagnostic techniques and new strategies for its control by means of analyzing the risk and development of epidemiologic models as well as establishing networks for sanitary monitoring,  Currently the most important project he coordinates is the European VACDIVA, call "H2020-SFS-2019-1, theme: A vaccine against African Swine Fever" endowed with 10 million Euros.