There is an updated version on African Swine Fever here

First occurrence of ASF outside African continent occurred in Portugal in 1957, near Lisbon, where an ASF outbreak caused mortalities around 100%. Three years later, in 1960, after an epidemiological silence, ASF reappeared in Portugal, rapidly spreading to the whole Iberian Peninsula. Since then, ASF remained present in Spain and Portugal for more than twenty years, until eradication was achieved in 1994 in Portugal and 1995 in Spain, consequent to great human and economic efforts.

During these years of ASF in the Iberian Peninsula, several European and American countries suffered outbreaks of ASF, mainly caused by movement of contaminated meat products. However, these outbreaks were eradicated except in the island of Sardinia, where the disease remains endemic since 1978. 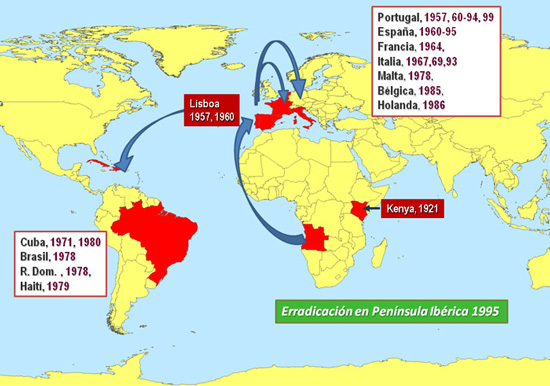 Since the eradication of ASF in Spain in 1995, with the exception of Sardinia and an isolated outbreak in 1999 in Portugal, the disease remained confined to the African continent. In the last decade, ASF became very important in Africa, affecting a large number of countries previously free of disease spreading to West and Central Africa, with a consequent increase in circulating virus and hence contaminated meat products.

This fact may have contributed to the most important epidemiologic change of ASF in recent years. In 2007, there was a great jump of the disease, with the reentry of ASF virus on the European continent, this time, by the Caucasus region. First outbreaks of ASF occurred in Georgia, near the port of Poti. Since then, the disease spread rapidly affecting the neighboring countries of Armenia, Azerbaijan and the Russian Federation, where ASF is still present without control (see current situation). 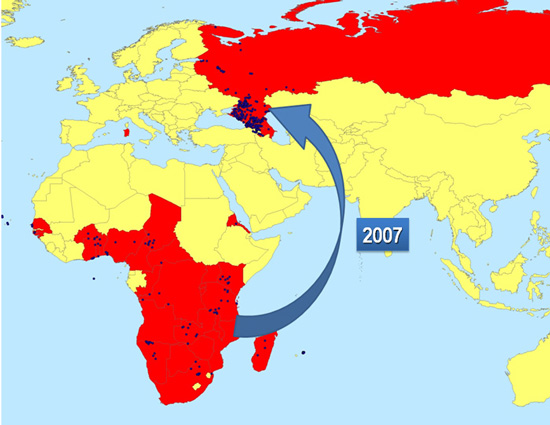 Since its introduction in 2007 in the Caucasus region, ASF has caused more than 320 outbreaks in four different countries, with subsequent slaughter of at least 150,000 animals. After the first outbreaks occurred in April 2007 near the port of Poti, caused by the supposed introduction of contaminated meat from East Africa, the disease rapidly spread through the area (watch animation).

In 2007 the disease spread throughout the territory of Georgia and Armenia. The first outbreak in Russia affected a wild boar located close to Georgian border. In 2008, ASF also affected the domestic pig population of Russia, causing numerous outbreaks in the southern regions close to the origin of the disease, except for a single outbreak quickly eradicated located at the East of the country. During following years (2009 and 2010) the disease was widely spread and established in the regions of Krasnodar and Rostovskaya, two of the most affected areas, and continued to expand slowly northward, affecting both domestic pigs and wild boars.

However, in 2011 several outbreaks were reported in areas considerably distant from the epicenter of the disease (Fig. 1, outbreaks identified with numbers), suggesting the lack of effectiveness of control measures in the area. 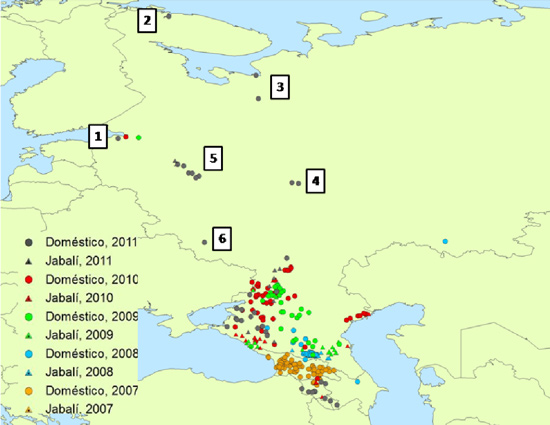 Fig. 1: ASF outbreaks occurred between 2007 and November 2011 in Russia and Caucasus countries.
(Source: own elaboration with data from OIE, 2011).

Some of these outbreaks were considered especially important because of its geographical location and the potential risk that they posed to the potential introduction of ASF in the European Union (EU):

For example, the outbreak notified in Leningradskaya province in March 2011 in the same area where two other outbreaks were notified in 2009 and 2010 (identified with number 1 in Figure 1). The repeated occurrence of outbreaks in the same area could be caused by the existence of an illegal commercial trade with the affected area. This fact poses a risk to the EU, especially to nearby countries (Finland, Estonia, and Latvia), although the current outbreak status is "Resolved" (OIE, 2012).

Other remarkable outbreaks were those ones notified in Teverskaya province, in the area surrounding the capital, Moscow. In this Russian province, ASF outbreaks have been reported both in domestic and in wild boar populations. This fact implies the existence of viral circulation in the wild population and thus, a greater risk of spread and maintenance of the disease in the area. And last outbreak occurred in Kurskaya province in October 2011 (identified with number 6) involved a serious risk to Ukraine, due to its geographic proximity. However, information from the OIE considers this outbreak as “Resolved”.

Considering ASF evolution since its introduction in the area in 2007, and especially throughout 2011, we can conclude that ASF is a disease out of control in Russia and Caucasus regions. Control disease measures implemented to date have been insufficient to stop the progress and dissemination of ASF in Russia.

Even though the trade of live pigs and their products from affected countries is strictly forbidden, there are other possible routes by which the disease could cross borders and reach the EU and other free countries. Currently the most important routes are the natural movement of wild boar, illegal trade, contaminated vehicles and fomites carried by them, as well as the existence of mix companies with bases in EU countries and Russia.

For this reason, we must continue extreme precautions and have the control and eradication programs always prepared. This is especially important in countries close to the affected area, those with frequent trade to or from Russia of all type of products, as well as those with the presence of mix companies in its borders with the consequent flow of movements to and from affected areas.