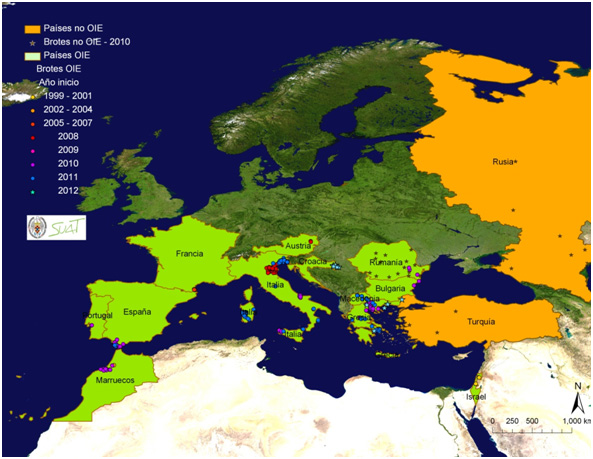 This lineage is originally from southern Africa, but since its coming to Hungary in 2004, it is causing major outbreaks in Eastern Europe both in animals (birds and horses) and humans (Figures 1 and 2). In fact, although the lineage cannot be confirmed in the majority of them, more than 500 cases of human disease have been described in 2012 so far (Table 1), mostly associated with the elderly and immunocompromised people. However, it appears that the virulence is higher than described in previous years. 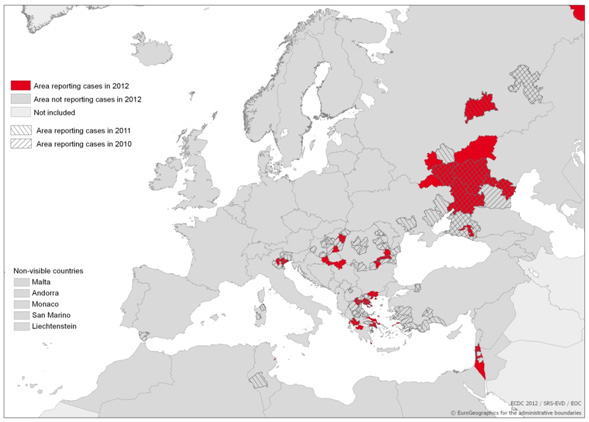 Historically, it was believed that lineage 2 was less virulent than lineage 1a, which has been circulating in Europe much longer and is considered responsible for the outbreaks in Western European countries, Spain included. However, recent studies have shown that both lineages can cause both mild and serious neuroinvasive cases (De Filette et al., 2012). Furthermore, there is evidence that both lineages are circulating in the Mediterranean basin simultaneously, even coinciding in the same areas (Savini et al., 2012) and that the timing of the appearance of the first outbreaks of the season is anticipating (July) (Barzon et al., 2012) compared to other years.

At present, the season for WN virus transmission is still open in the European Union. Thus, the situation with both lineages in horses and birds has to be monitored, both in affected and neighbouring countries. The peculiarities of recent outbreaks and the creation of new epidemiological scenarios suggest a change in the pattern of WN occurrence. Furthermore, although there is evidence that vaccine against one lineage also protects against the other (see e.g. McDonald et al., 2007, Martina et al., 2008) in vivostudies in horses with strains that are currently circulating would be recommended.