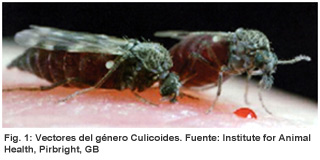 BTV affects ruminants, both domestic and wild. Sheep are considered to be the main host, since it is the species that develops the disease, presenting high rates of mortality and morbidity. Moreover, other non-ruminants may be infected by BTV, such as shrews or dogs.

For the typical serotypes (1-24), the main route of transmission is by midges of the genus Culicoides, although not all species in this genus, which consists of more than 1400 species, are capable of transmitting BTV. Other epidemiologically less relevant routes of transmission have been described: semen, embryos, transplacental and iatrogenic.

Historical development and status in Europe

Bluetongue virus (BTV) was described for the first time in South Africa in the early twentieth century. The disease distribution was limited to Africa, where the infection was endemic in wild ruminants, until the disease was described in Cyprus, in 1943. Since then, BTV has spread across the Mediterranean Basin and other regions such as USA, Canada or Australia, always determined by the presence of competent vectors.

Currently, the geographic distribution of the disease encompasses a worldwide distribution. However, until 2006 it was restricted to latitudes between parallels 35º N and 40º S (Figure 2). 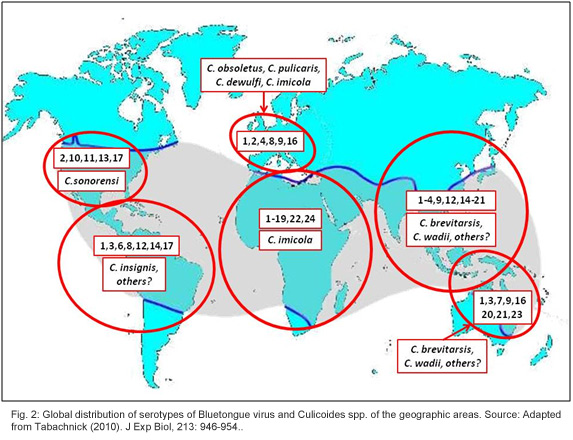 In Europe, at the beginning of the century the disease was located in southern countries until 2006, particularly in the Mediterranean Basin, where serotypes 1, 2, 4, 9, 10 and 16 were reported. In August 2006, the first outbreak of serotype 8 was notified in the Netherlands. The disease spread rapidly to Germany, Belgium, France and Luxembourg. This serotype had never been reported in Europe and these regions had never been affected by BTV. In subsequent years (2007 and 2008), the disease spread to Switzerland, Denmark, Czech Republic and the United Kingdom, reaching Spain in January 2008.

Furthermore, in 2007 the serotype 1 was introduced in Spain, also spreading to Portugal and Italy. The following year, serotype 6 was notified in the Netherlands and Germany, and serotype 25 in Switzerland. Serotype 11, was found in 2009 in Belgium. The outbreaks of both serotypes 6 and 11 occurred by vaccine strains.

After years of epidemiological silence, in 2015 serotype 8 reappeared in France. Later in 2018, it spread to Switzerland and Germany; and in 2019 to Belgium. In 2017 serotype 4 was introduced in France and serotype 3 was reported in Sicily. A year later serotype 3 appeared in Sardinia. Likewise, in 2018 serotype 1 was extended from Spain to Portugal.

In addition, in recent years several strains of atypical BTV serotypes have been identified circulating in European territory. 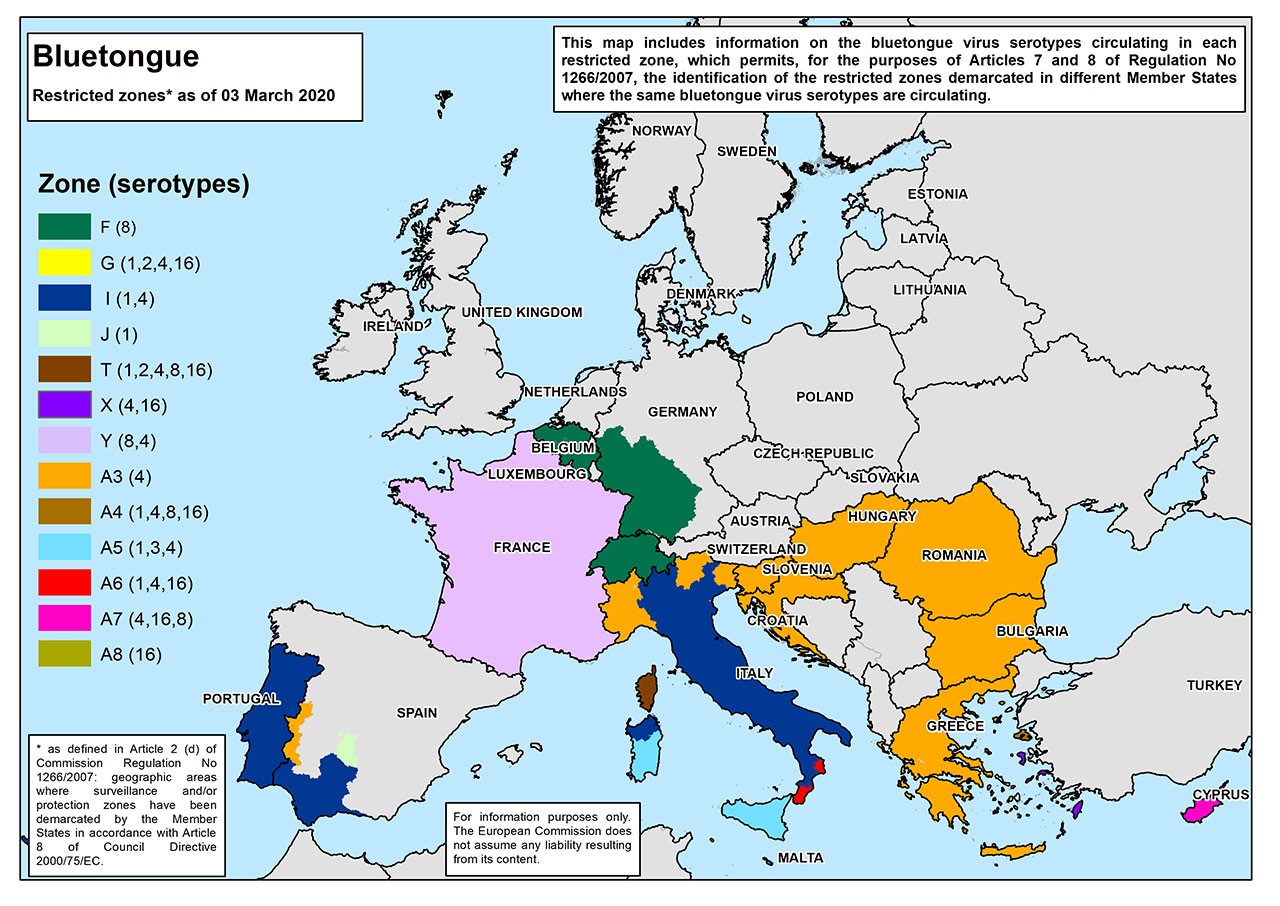 Evolution of the disease in Spain in the XXI century

Since 2000 until now, Spain has reported four Bluetongue Virus (BT) serotypes (serotypes 2, 4, 1 and 8). Serotypes 2, 4 and 1 seem to have been introduced into Spain by infected midges carried by the wind from northern Africa. However, the route of introduction of serotype 8 may be due to trade of infected animals from the central and northern Europe. Control measures have been based on vaccination and restriction of animal movement from affected to non-affected areas, achieving the eradication on several occasions (Balearic Islands in 2002 and 2005; mainland Spain in 2009).

In 2007, BTV-1 was introduced in Spain and during the initial years of virus circulation in the country, it suffered a significant geographical expansion; reaching northern regions. As of 2008, the entire peninsular Spain was a restriction zone for BTV-1. In years to come, the number of reported outbreaks and geographical extent were reduced. From 2018 to mid-2020, no viral circulation of this serotype has been detected.

BTV- 4 has been introduced twice in mainland Spain. The first in 2006, being Spain declared free of BTV-4 in 2009. In 2010, it reappeared and. to date. outbreaks continue to be reported every year. 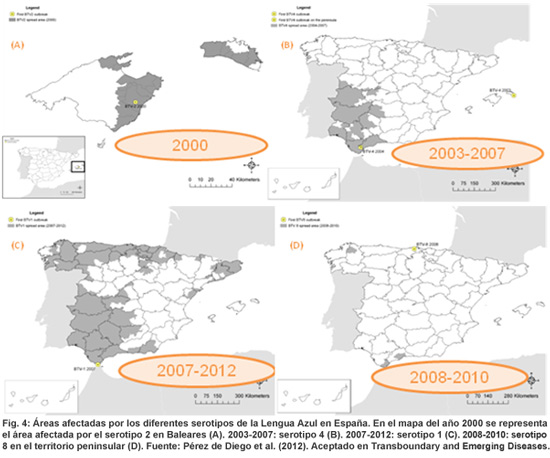 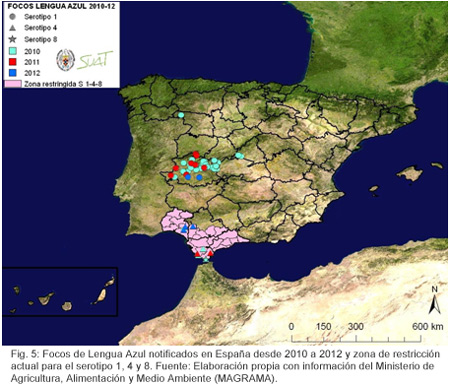 The restriction zones for BTV-1 and 4 of Spain as of June 2020 are located in the south-west and center-west of the peninsula. 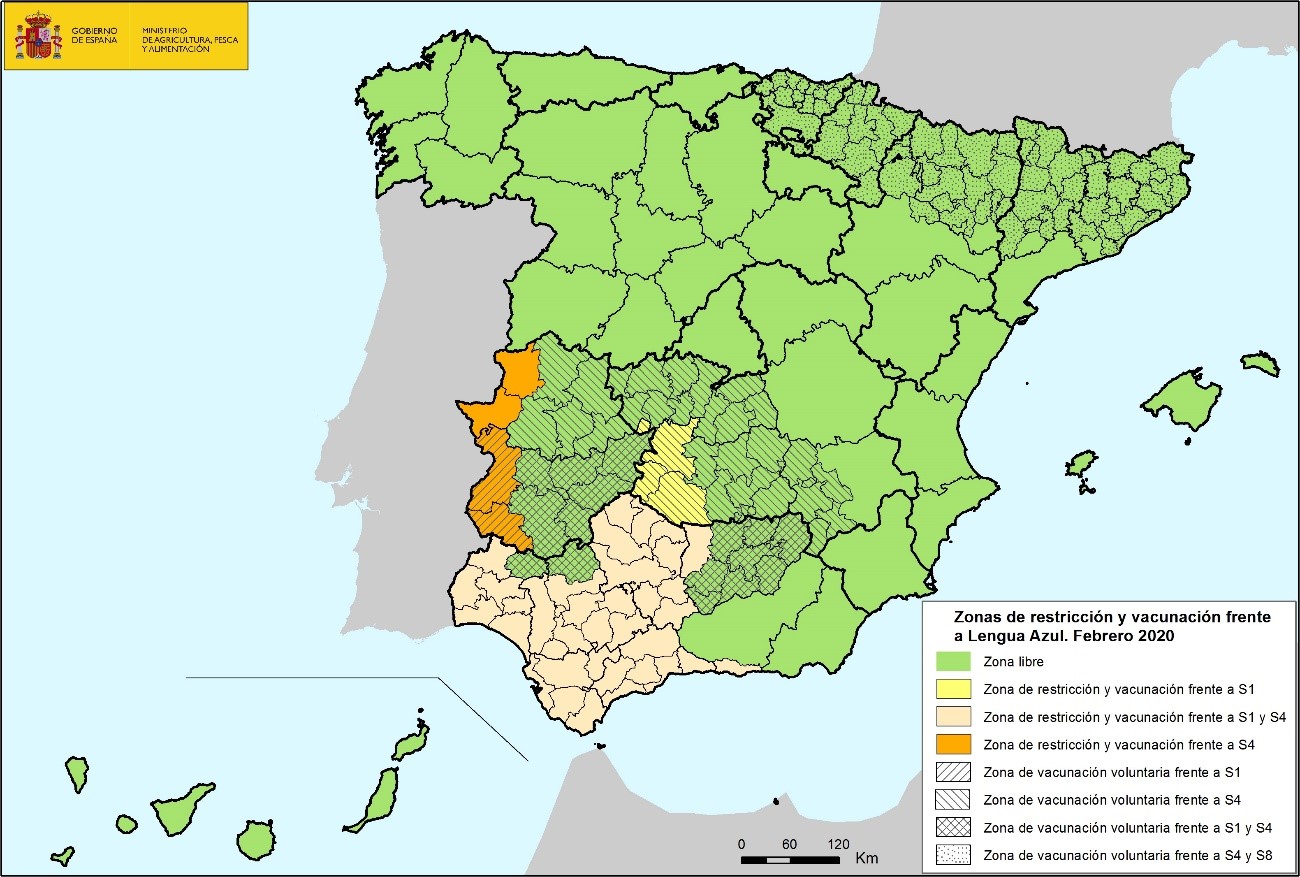 With the emergence of an outbreak, early suspicions are based on characteristic clinical signs and on the presence of vectors in the outbreak area. However, laboratory testing is required for confirmation of the diagnosis. The laboratory techniques are prescribed by the World Organisation for Animal Health (OIE) in Chapter 2.1.3 of the Manual of Diagnostic Tests and Vaccines for Terrestrial Animals 2011). In Spain, the diagnosis of this disease must be made in the diagnosis laboratory of the Autonomous Communities or by the National Reference Laboratory for Bluetongue virus (BTV), Laboratorio Central de Veterinaria de Algete. The diagnosis is based on virus isolation and identification from blood and tissue samples and in the detection of antibodies in unvaccinated animals:

Prevention and control of Bluetongue Virus

World Organisation for Animal Health (OIE) established in Terrestrial Animal Health Code (Chapter 8.3, Bluetongue) what kind of measures should be carried out against Bluetongue virus (BTV). These measures are included in the European Union (EU) (Directive 2000/75/EC) and national legislation (Manual Práctico de Operaciones en la Lucha Contra la Lengua Azul - Spanish). The recommendations contained in these legislations are based on:

Vaccination is the most effective measure to minimize losses associated with the disease, eventually interrupt the cycle of the animal to the vector and allow the eradication of the disease. Due to the existence of many serotypes should be used vaccines against one or several serotypes isolated in the outbreak. There are several types of vaccines against Bluetongue:

Bluetongue vaccination is recommended by the World Organisation for Animal Health (OIE) and the European Union (Directive 2000/75/EC) since an effective method for the Bluetongue virus (BTV) eradication. This technique stimulates the immune system preventing viral replication in animals, therefore decreases the viral circulation. Furthermore, it facilitates the movement of animals of susceptible species from restricted zone to free area with adequate sanitary guarantees. Finally, this goal is the final eradication of the disease.

In Spain, we have used two types of vaccines for the disease control: live vaccines monovalent used from 2000 until 2006; and inactivated vaccines monovalent since 2006, or polivalent (serotypes 1 and 4; serotypes 1 and 8), since 2009. Currently, the inactivated vaccines are the only ones in use. Vaccinations of the different provinces are established according to the restriction zones established by the Spanish Ministry of Agriculture, Food and Environment (MAGRAMA).

From June 30, 2011, vaccination was voluntary at the discretion of the owner of the farm, who also became responsible for assuming its economic cost. It was not until 2015 that compulsory vaccination was extended in all the restriction zones for the different serotypes. Currently, vaccination against BTV in Spain is regulated by the regulation AAA/1424/2015, which establishes specific protection measures against bluetongue, which has recently been modified by the regulation APA/206/2020. Here mandatory and voluntary vaccination zones are defined in areas close to the restriction zones, with respect to serotypes 1 and 4 (see figure 6).