The Community of Madrid has awarded funding for this Program in the area of Agrifood and Biotechnology coordinated by the VISAVET Centre of Complutense University.

The act of granting Programs Activities R & D Technology from 2014 to 2018 was held at the Real Casa de Correos in Madrid on Wednesday, October 22nd and was chaired by the Community of Madrid President, Ignacio Gonzalez, the Education, Youth and Sports Councillor, Mrs. Lucia Figar, and Education, Youth and Sports Deputy Councilor Mrs. Alicia Delibes.

The Adavance Technnologies in Health Surveillance (ATHS) programme proposes the application of emerging technologies in the agrifood area to improve the quality and food safety together with the eficiency in agricultural and livestock production, following the recomendations by the FAO, European Union and WHO for next decades. The programme framework covers the whole food chain according to the approach “from the farm to the fork. ”. 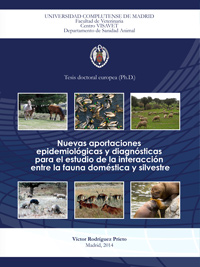 Wildlife diseases have become increasingly important due to the role of wild animals in infections of major impact on animal and public health, as well as in environmental management. The scenario where wild animals inhabit has changed in recent years, mainly due to anthropogenic factors, which have promoted the creation of situations of interaction between wildlife and domestic animals and/or humans. Considering this human-domestic-wildlife interface (HDW interface) when managing infectious diseases is the best way to cost-effectively allocate resources and achieve an adequate health status.

This thesis entitled New epidemiological and diagnostic tools for the study of the interaction between domestic and wild animals intends to develop, integrate and apply different epidemiological and diagnostic methods focused on various infectious diseases used as a model to study the Spanish HDW interface. Its aim is to cover various types of diseases (i.e. new, exotic and endemic diseases) as well as several hosts (i.e. wild ungulates, wild birds and zoo animals). The work developed in this thesis consists of six papers published in journals of international impact and one in preparation, describing epidemiological models, diagnostic methods, immunological studies and experimental challenges, all of them preceded by an extensive literature review.

The articles included in this thesis describe methods and results that are innovative in the field of infectious diseases and wildlife. They also serve as a model for other diseases, wild species or regions with similar epidemiological features. All the issues raised in this thesis can have direct application to surveillance and control of diseases in wild populations, especially those transmitted in the HDW interface, whose inclusion in comprehensive plans for health management is becoming increasingly paramount.

Was euthanasia for Excalibur the right choice?

José Manuel Sánchez-Vizcaíno, Professor of Animal Health, said that to sacrifice Excalibur (the dog of the spanish nurse infected with Ebola, Teresa Romero) was the correct decision.

"I think it was the most appropriate thing to do", he said, given the high probability of infection of the dog and the lack of conditions to maintain biosecurity quarantine Excalibur.

Fig.: Restriction areas for different serotypes of Bluetongue in Europe as of October, 2014.
Source: European Commission

Outbreak of Bluetongue located outside of the restriction zone 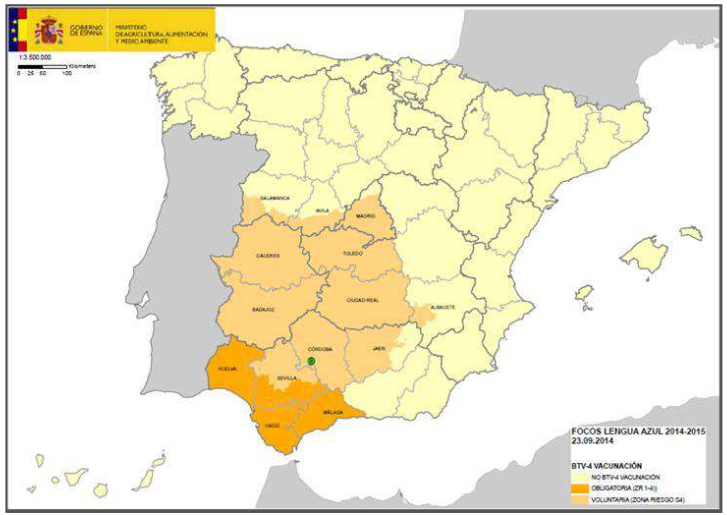 An outbreak of bluetongue serotype 4 has been notified in September outside of the current restriction zone in the Córdoba province (Figure). Confirmation of this outbreak increase the restriction area against serotypes 1 and 4, as well as the compulsory vaccination program against serotype 4. Similarly, vaccination of susceptible animals is recommended in the risk area of reintroduction of this serotype. In the same way, the Spanish authorities have strengthened prevention, surveillance and control in the area.

Professor José Manuel Sánchez Vizcaíno was appointed Honorary Member of the Academy of Veterinary of Murcia.

The inauguration will take place on June 4 at 19hrs in the hall of the Archaeological Museum of Murcia , during which honoree will pronounce the speach: A Life Surrounded by Viruses. 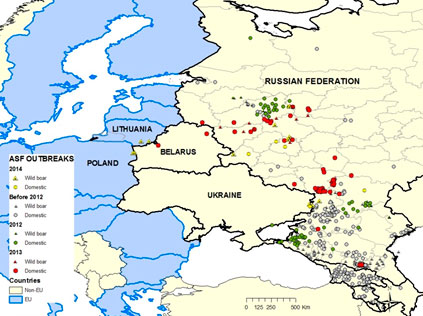