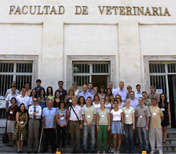 From  27th of June to the 1st of July, Madrid city is hosting the "Training course on African Swine Fever (ASF) epidemiology and laboratory diagnosis (ASF-EPILAB)".

The activities take place at the Faculty of Veterinary Medicine of Complutense University and at the Research Center for Animal Health (CISA-INIA), this one is European Union and FAO Reference Laboratory for ASF.

You can take a look to the program.