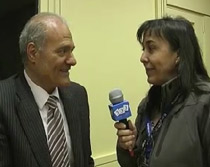 The ESVV first meeting was in 1989 and actually has over 170 veterinary members from other disciplines related to virology, from about 21 countries.
This society meets annually at a conference that seeks to promote the exchange of knowledge and methodology and collaboration between institutions and research groups. Therefore, it is our pride that Spain has been chosen to host the 2012 edition.
“One World, One Health, One Virology” , will be the title of the 2012 edition, and these are some of the topics covered:
The novelty of this edition is the union for a day with the international conference celebrating the European Society for Clinical Virology (ESCV).
Tweets VISAVET